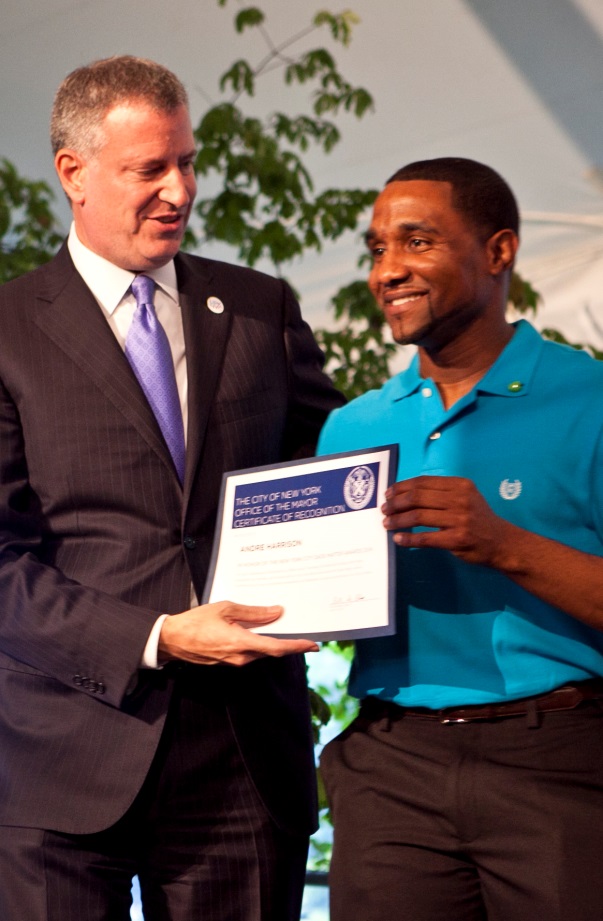 "This day is a gift," said Errol Greene, father of two. He, and 400 other guests, came to Gracie Mansion to celebrate the 4th Annual NYC DADS Matter Awards, which honors 10 men who have overcome obstacles and become outstanding fathers. Greene was an honoree in 2011, the first year of the award. Launched in 2010, The Mayor's Fatherhood Initiative has four goals: to remove barriers that fathers may face in interacting with City agencies; to make all City agencies as "father friendly" as possible; to assist in the creation of memorable moments between fathers and their children; and to support fathers as they increase their capacity to be good dads.

"I am so happy for the fathers who are going to be honored today.  It's going to make them feel great," Greene said. "Coming to the Mayor's house, be honored for being a dad and get a meal? Can't beat that!"

"The most profound thing I have ever done is to raise our children," said Mayor De Blasio. "It has been a sacred calling." The Mayor and First Lady both spoke about their own fathers as well as their experiences as parents.

They emphasized the importance of relying on each other and the advantages and challenges they faced as parents. Mayor de Blasio faced challenges of having an absent father that turned to alcoholism while the First Lady praised her father for being there for her even though he was not outwardly affectionate.

The audience laughed in agreement when Mayor de Blasio joked that he and the First Lady were "recovering middle school parents." He announced that he plans on guaranteeing free after school programs for middle school students in the next two years.

The crowd was treated to hot dogs, hamburgers and other picnic fare. Terrence Brummel, one of the 2014 honorees, seemed to be smiling the entire evening.  "This is great," Mr. Brummel said.  "We're mentoring other men to be better dads. That is what this is all about."